Laravel PHP framework has been the framework of my choice for the past 12 months – it’s elegant, trendy and full-featured. Official documentation is comprehensive so deploying both web application and workers is a piece of cake, but what if you want to run it in AWS Elastic Beanstalk environment?

This tutorial will not only help you run Laravel’s scheduled tasks and queued jobs in AWS worker environment, but also will prove once again how easy it is to extend Laravel standard functionality.

Amazon offers a special type of EB environment for workers – a ‘worker’ environment. While AWS can run both scheduled tasks and queued jobs, the flow is slightly different from the standard Laravel flow: 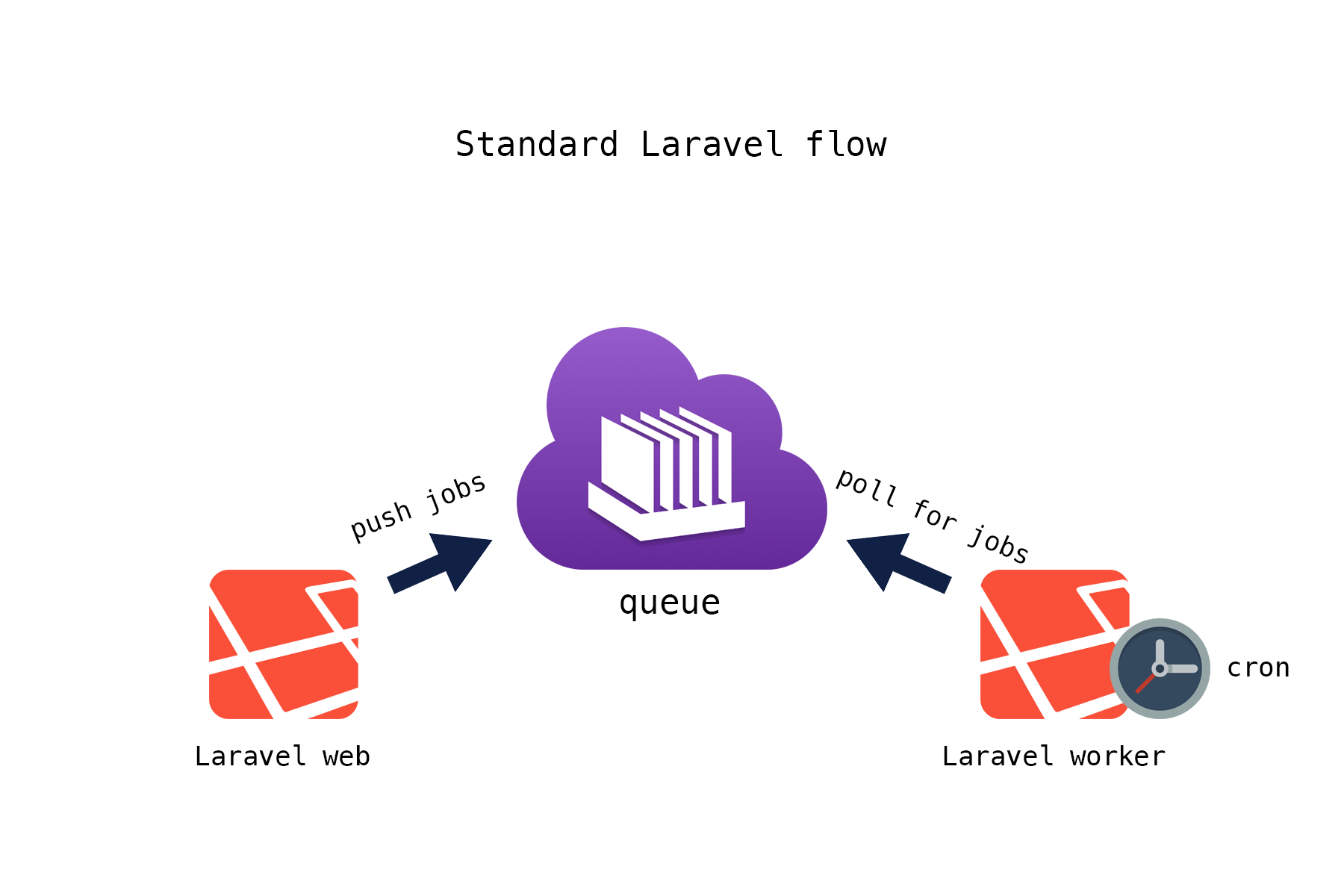 In the standard flow, Laravel pushes jobs to the queue and another (or the same) instance of Laravel polls for new jobs from the queue. Scheduled tasks are executed by Laravel’s own scheduler that is invoked every minute from the UNIX cron tab.

When it comes to AWS EB, we cannot install our cron tabs directly and we cannot (or at least, we should not) pop from the queue directly: Instead, a daemon maintained by AWS will send POST requests to our instances informing us of scheduled tasks subject to run and new queue messages. While this may not sound terribly complicated, Laravel (as of 5.2) doesn’t support neither out of box – scheduled tasks are expected to be run in the console and queues are supposed to be processed by queue workers.

Let’s start with scheduled tasks. We want to be able to run whatever is executed by php artisan schedule:run from a webhook. We don’t want to create separate hooks for each scheduled task because:

This is our final controller method that runs all scheduled tasks, it’s very similar to Laravel’s own ScheduleRunCommand::class:

The following line is very important. As we know, Laravel will try to resolve any dependancies we list in the argument list, but in this case there will be an extra side effect that we need:

Important note: swap Kernel with Schedule in the argument list and method will stop working. Kernel has to be resolved first, because of it’s side-effect.

The rest of the method is quite straight forward and resembles ScheduleRunCommand a lot. We would love to re-use the existing class but it couldn’t be overridden and we didn’t want to use default console output formatter.

We tried to keep any overhead at minimum so we didn’t create any new Queue or Connection classes – it’s just one custom job class that is passed to framework’s default worker.

Basically, all we did is extract SQS meta data from the HTTP headers and inject it into job, so it’s kind of HTTP to SQS adapter. We don’t need to delete the job or mark it as failed – everything is done by AWS. If we don’t return HTTP status code of 200 (let’s say we caught an exception) AWS will do the rest.

That’s it! Now we just need to add a couple of routes (just two routes for any number of scheduled tasks or queues!) and we are good to go.

In order for your scheduler to get called every minute, provide a cron configuration file with your AWS application – you can either include it in your repo or add it somewhere at the last stage. Anyway, file should be called cron.yaml, should reside in the root folder of the application and should look like:

Laravel once again proved to be a flexible, easy-to-extend framework.

Born in the snows of Siberia

We decided to rename Drago…

If you find yourself implementing…